After the fall of Napoleon in 1815, Germany was divided into a loose union of 39 kingdoms ruled by monarchs who often had conflicting interests. Disillusioned with the state of affairs and inspired by the revolutionary wave sweeping through Europe, August Heinrich Hoffmann penned his most famous poem, Das Lied der Deutschen, which represented a call to action for the German ruling class to put aside their differences and create a strong, free and united Germany.

The lyrics became a manifesto of the liberal democratic movement behind the March Revolution of 1848, since the proponents of a united Germany also advocated for the freedom of the press, the rule of law, and other civil rights.

During the Nazi era, Hitler and his propaganda machine recognized the powerful message of Hoffman’s poem and repurposed the first stanza for Nazi Germany’s national anthem. At the the opening of the 1936 Summer Olympics in Berlin, Hitler and his entourage, alongside Olympic officials, walked into a stadium of three thousand Germans singing “Deutschland, Deutschland über alles”. In this way, what was once an uplifting poem about freedom and unity became a despicable chant of the so-called master race.

The Nazis applied the same cynical rebranding principle to other positive symbols such as the swastika or the German eagle, forever perverting their image in the Western world.

Last week, the president of the United States held a disastrous press conference at Trump Tower in New York. While the initial goal of the meeting was to discuss an overhaul of the country’s infrastructure, Mr Trump quickly went off-topic and started praising “the fine people” who attended the rally in Charlottesville. When the press questioned his support for the self-proclaimed alt-right hate group that organized the rally, Trump pointed to a reporter in the crowd and asked for a definition of the alt-right.

“Define alt-right to me. You define it. Define it for me. Come on. Let’s go.”

The term alt-right was coined in 2010 by Richard Spencer to reference a growing phenomenon in the United States and Europe centered on white nationalism. Mr Spencer is an American Nazi who has recently gained notoriety for a number of controversial speeches where he has proposed “a peaceful ethnic cleansing” of the United States. Appearing earlier this year in front of the annual gathering of the National Policy Institute at the Ronald Reagan Building in Washington, D.C., he saluted an audience of 200 alt-righters by shouting “Hail Trump!” and “Hail victory!”; in response, many of them responded with Nazi salutes. (For those less trained in the intricacies of the German language, “Hail victory” directly translates to “Sieg heil.”) 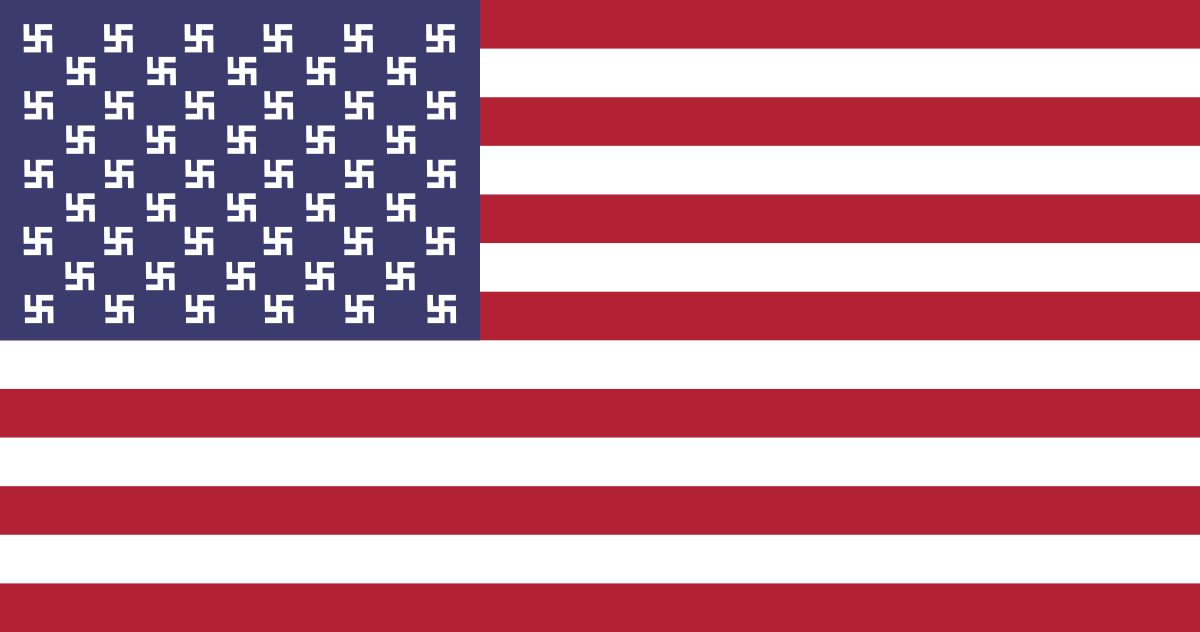 The front cover of the Penguin edition of the Man in the High Castle by Philip K. Dick. The alternative history novel depicts the ultimate alt-right dream-world where Nazi Germany has won the Second World War and rules over large portions of the United States

This is just one example in a long series of blunt associations between the alt-right and the American Nazism movement. A benign or even bland-sounding phrase, the term has been carefully worded to remove any throwback reference to Nazism which would immediately trigger an outright negative emotional response from the general public. However, anyone scratching beneath the surface will quickly discover a hard-hitting reality: the alt-right is ripe with the same overt racism, white supremacism, and Nazism that dominates the KKK, the Aryan Nations, the National Socialist Movement or the Institute for Historical Review.

In actual fact, the alt-right is nothing more than another euphemism for homegrown American Nazism. In a similar way to how Hitler cherry-picked lines from Das Lied der Deutschen to suit his heinous program, alt-right enthusiasts have been working extra-hard to hide their true intentions by packaging and marketing their message as an equal alternative to genuine civil rights activist movements. The same “fine people” chanting “Jews will not replace us” and waving Confederate flags in Charlottesville will therefore be found marching for “men’s rights”, parroting “White Lives Matter” or declaring themselves crusaders against “radical Islam.”

Avoiding or ignoring this clear convergence between the alt-right and American Nazism means playing into a narrative specifically designed to sugarcoat and spoonfeed Nazi ideology to a general public who is more than ever distrusting of mainstream politics and eager for new ideas and faces.

Going back to the aforementioned press conference at Trump Tower, the media in attendance should have taken Mr Trump’s statement at face value and acknowledged his biggest achievement since taking office earlier this year: knowingly or not, Mr Trump has now become the official spokesperson and apologist for the modern Nazi movement in the United States.

And since Mr Trump prefers images to long-form written communication, hopefully one of his aides will introduce him to The Man in the High Castle. I’m sure he’ll find the version of New York depicted in the series to his liking.